SDN implementation from any vendor is a big undertaking.  Unlike traditional networks, where lifecycle activities individually within network, compute, storage or security teams can happen in fair bit of isolation from each other, SDN implementation requires all teams, especially network, compute, application and security teams, to work more closely with each other than ever before. 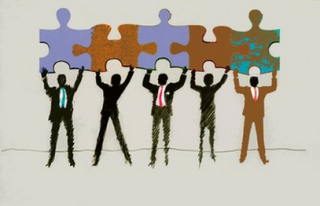 In the past, network team would provision some interfaces, storage team would provision some LUNs, and firewall team would configure some flows, and then the compute/application team build their virtual and physical infrastructure.  With SDN, multiple teams merge into one or two larger teams.  The virtualization and storage team provision the infrastructure once for the all the hypervisors, and then is mostly out of the picture.  The network/security/compute team (now effectively one team) works with the application owners directly to provision virtual networks with (preferably) zero-trust security and provisions VMs (or even physical servers/appliances) based on application requirements.

In smaller organizations, the network/security/compute team roles could be merged into fewer roles, however in larger organizations, individuals may continue to specialize and control their specific areas of responsibilities, however, they need to learn about each others’ domains and work much more closely than before.

With SDN, an example application owner, administering the AD environment, needs to sit down with the network, security, and compute specialist and tell them in more detail how AD functions and what it’s requirements are.

Since all servers and workstations need to communicate with AD for authentication and acquiring GPO/policy, the firewall specialist may create a global policy allowing appropriate flows to just the required TCP/UDP ports from all subnets within the organization.  There will naturally be redundant AD servers – so they would be made part of one group – and all the rest of the servers/workstations would be made part of another logical group.  The flows then would be enabled in between groups where the group membership would be dynamic – based on IP address, VM name, location, or almost any other factor.  The security team would reuse these groups, possibly nesting them inside other groups, or nesting other groups inside the AD related groups, a practice which ultimately helps the firewall functionality to scale better.

The network specialist would make sure that the AD servers’ group is located in the DC, subnet and pod which would overall provide the least latency and appropriate throughput to all of the AD’s clients.  In addition to the appropriate VLAN/Layer 2 segment configuration, and appropriate routing configuration to ensure AD is accessible by all enterprise clients, it may even be worthwhile prioritizing AD traffic via QoS policies (that translate between SDN virtual routers and switches and the physical routers and switches).  For some other types of applications, e.g. email, web servers, etc. other networking functions such as load balancing, IDS/IPS and VPNs may also be implemented.

The compute specialist would make sure that the VMs serving the AD application are appropriately sized, have the required levels of backup, have appropriate high-availability and disaster recovery options available, affinity rules where required, and have appropriate priority above other VMs in terms of CPU and memory.

Similar exercise needs to happen for every application!  Depending on the size of the data center, there could be hundereds or even thousands of applications hosted in just one data center.

So where do you begin?

Since the above-mentioned process is a daunting task, most SDN solutions initially focus on migrating the infrastructure into the SDN based solution mostly intact – mimicking existing routing, switching, firewall, load balancing and other components of the network.  Then, applications are slowly either evaluated using the above process or only new applications are implemented using the above process with old ones eventually sunsetting.  Even migrating in such a manner is a daunting task as well – but it’s a little more manageable than having to go through 1000+ applications and understand exactly how each one works and implementing zero-trust policies from the get-go.

Although in traditional networks, each specialist may have their own monitoring tools, which they may continue to use, the advent of SDN brings a new class of monitoring tools, often built-in to the SDN solution that monitor the health of the whole infrastructure: network, compute, firewalls and storage.

This finally brings us to the topic of this post.  Having been through the early stages of deploying an SDN solution, in my case with VMware NSX in particular, one can see that the larger the data center, the more complex the migration will be.  Based on above considerations, and other lessons learned by my team and the overall project team, here are some recommendations:

Although my current project is exceptionally well managed, I am hoping the above pointers will save teams working in larger organizations some headache 🙂